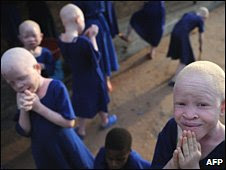 Witnesses have testified in the case of 11 men in Burundi, accused of the attempted murder of albino people and selling of their body parts.

Initial charges of murder have been dropped because the prosecution failed to produce enough evidence.

Police suspect the body parts are being sold in neighbouring Tanzania, for use in witchcraft.

Forty-six albino people have been murdered in Tanzania in the past 18 months, but no-one has been convicted.

But the violence against albinos is not restricted to Tanzania; last November a six-year-old albino girl in Burundi was found dead with her head and limbs removed.