In modern day South Africa there is problems with poverty and corruption. Most of this is directed at immigrants from other African states. An undercover team videos the corruption of the police force. They find that you can be freed regardless of your crime, if you have the money.

The War against Women in the Congo

An inspiring story of one young man: nineteen-year-old David Were lives in Africa's largest slum where polluted water, disease and safety are daily concerns. He tells his story in his own words.

Congo Approves Economic Stimulus Package Of AK-47 For Every Citizen

After decades of civil war, and years of work clearing up after it, Mozambique is slowly moving towards being declared free of land mines. All thanks to man's unlikely new best friend: the rat.

A new crackdown on homosexuality in parts of Africa has forced gay communities into hiding, fearing for their lives. 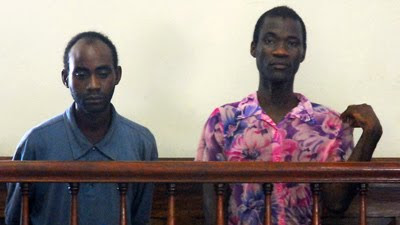 In Malawi, two men who dared to go public with their relationship by holding a traditional "marriage" ceremony are on trial for indecency, and face 14 years in jail.

"It's so scary," one gay man, who didn't want to be identified, told Sky News in the city of Blantyre, where the trial is taking place.
"We are not feeling free and are worried about being arrested.

It is the first case to be brought under Malawi's longstanding legislation banning homosexuality in years.

The rise of US style evangelist preachers has contributed to a hardening of attitudes in the tiny southern African state.

"Biblically it is demonic," pastor Stanley Ndovi said, flipping through the pages of his bible to show me the passages that condemn homosexuality.

"It is wrong and these people should be counselled and helped."

Inside his church on the outskirts of Blantyre, his congregation laughed when he told them that Sky News had come to talk to him about "gay rights".

At best, homosexuality is viewed as a mental illness in Malawi, at worst a form of Satanism with the power to infect the entire population.

"In the West you have allowed homosexuality and it has spread," pastor Ndovi said.

The gay couple on trial are considered such a risk to the public that they have been denied bail and are handcuffed every time they appear in court, jeered by the crowds as they're led to the dock. 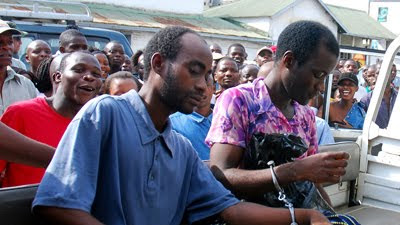 "Sometimes I think it would be better to kill myself," another gay man said. "We are not even treated as human."

Malawi is not alone in its new hardline approach to gays and lesbians. Uganda is considering introducing legislation that would result in the death penalty for some "homosexual offences".

The Ugandan government has tried to distance itself from the plan after criticism from its biggest donor, the United States.

Rwanda is also seeking to tighten the laws banning homosexuality.

The crackdown has alarmed human rights campaigners and health workers who are trying to combat the spread of HIV and Aids.

In Malawi, 10% of the general population is HIV positive, with the figure rising to 25% among homosexual men.

There are fears that the gay community will be too scared to come forward to be tested, fearing reprisals from the state.

But even there, there have been attacks on gay men, and lesbians have been subjected to so-called "corrective rape".
Posted by AfrikaEye at 14:29:00 No comments: Links to this post

Sudan: The Comprehensive Peace Agreement and Its Aftermath

Southern Sudanese share their perspectives on the Comprehensive Peace Agreement and its aftermath. What progress has been made and what have the flashpoints been? Is Sudan on a tenuous path towards peace, and stability, or has the peace agreement fragmented to the point where a return to civil war is inevitable?

For many African countries the discovery of diamonds has turned into a curse, with blood or conflict diamonds fuelling exploitation, subversion and division. But in Botswana, its a different story.

The diamond has transformed Botswana from one of the poorest countries in the world, to one of the most prosperous and stable countries in Africa. An inspiring initiative has seen Botswanas vast diamond reserves, worth about three billion US dollars a year, being used to share wealth throughout the nation.

Trade Consultant Ntetleng Masisi says they used diamonds to bring about health facilities, education and a markedly improved quality of life, Masisi says that the partnership is a necessity, The earnings from our exports of diamonds have really done a lot for us. But Botswanas reliance on diamond revenue means that the whole of the countrys future is now in the hands of the diamond dealers.
Posted by AfrikaEye at 15:16:00 No comments: Links to this post