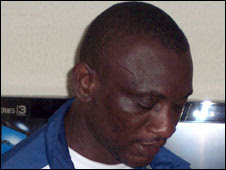 A Nigerian oil militant leader has been shot dead in police custody.

The Movement for the Emancipation of the Niger Delta (Mend) claim Ken Niweigha known as "Daddy Ken" was executed by the police.

But the police say he was killed in a shootout after he took them to his hideout to surrender his weapons.

Human rights groups say extra-judicial execution is "shockingly common" in Nigeria, where the police lack the capacity to do their jobs effectively.

After his arrest on Tuesday, Mr Niweigha, who led the Egbesu Boys armed group in Bayelsa State, was paraded in front of journalists.

He then agreed to take the police to his hideout in Odi town and surrender all his arms, local media reported police commissioner Onouha Udeka as saying.

"He promised he was going to take us to his hideout in Odi where he hid his weapons," said Mr Udeka.

"But we did not know that he had arranged with his gang to attack us and possibly get him freed. Ken was shot trying to escape."