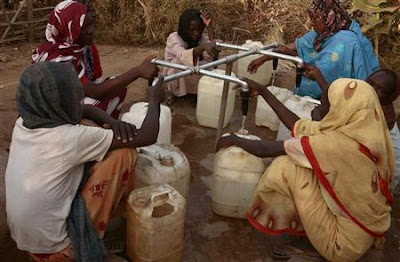 KUWAIT (Reuters) - Qatar called on both the Sudanese government and Darfur rebels on Wednesday to make concessions to end years of conflict and ensure the flow of humanitarian aid, as a meeting got underway in Doha to discuss peace efforts.

Special envoys to Sudan from the United Nations security council and the European Union joined the mediation talks sponsored by Qatar, which is ramping up its role as a peace broker in the Middle East and North Africa.

Qatar's Minister of State for Foreign Affairs Ahmad al-Mahmood said both sides should end attacks and make compromises if a lasting peace agreement was to be hammered out, the official Qatar News Agency reported.

Djibril Bassole, mediator for the U.N and African Union, said the envoys were trying to put together a plan which includes a timetable for reaching a peace deal, the complete cessation of hostilities and the sharing of wealth and land.

Darfur rebels took up arms against the Sudanese government in 2003, demanding better representation and infrastructure for the Western region.

International experts estimate some 200,000 people have died and 2.5 million have been driven from their homes. Khartoum puts the death toll at about 10,000.

Earlier this month, The Justice and Equality Movement, one of Darfur's rebel groups, held talks with Sudanese government after officials in Qatar in February after signing an agreement to hold peace negotiations.

Qatar, a U.S. ally, has also sponsored peace talks between warring factions in Yemen and Lebanon, and hosted meetings between Palestinian and Israeli officials.

It mediated an agreement in May 2008 between rival Lebanese factions that ended an 18-month political conflict that had put the country on the brink of civil war.