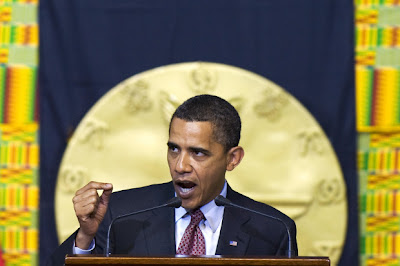 On his recent visit to Ghana, U.S. President Barack Obama condemned war, corruption, tribalism, and all the other ills that have bedeviled our continent. Many Africans in Africa and the diaspora were moved by the speech, as were many Africa observers in the West. The speech captivated imaginations because it appealed to people's basic common sense.
That is where its positive contribution ends.

Rather inconveniently, all the attention Obama's speech has gotten disproves his opening remark: "We must start from the simple premise that Africa's future is up to Africans." It is not the speech of an African leader on the future of the continent that is exciting debate in the media and finding space on the blogs; it is a speech by the U.S. president. This very simple contradiction reveals the world's collective tendency to seek Africa's solutions from the West.

Beyond its many good phrases and populist appeals, Obama's speech did not deviate fundamentally from the views of other Western leaders I have read throughout my lifetime -- on aid, on civil wars, on corruption, or on democracy. Obama repackaged the same old views in less diplomatic language. He had the courage to be more explicit on Africa's ills because, due to his African heritage, Obama can say as he wishes without sounding racist -- a fear that constrains other Western leaders when talking about Africa.

Even so, Obama said nothing new. He assumes that African countries have been mismanaged because leaders on the continent are bad men who make cold hearted choices. His solution is thus to extend moral pleas for them to rule better. Yet it is not the individual behavior of Africa's rulers that demands our closest attention, destructive as that behavior may be. It is the structure of incentives those leaders confront -- incentives that help determine the choices they make.

Using this logic, we can start to ask more-useful questions. If the choices made by Africa's rulers have destroyed their economies, under what conditions can they develop a vested interest in growth-promoting policies? If Africans are going to war much more often than other human beings on the planet, what causes them to do so? When is peace more attractive than military combat?

Governing is not about making simplistic choices on who is right and who is wrong. It requires making complicated trade-offs, some of which might be costly in the short term. Take negotiated conflict settlements, for example, a policy that has stabilized Liberia and Sierra Leone after the two countries' brutal civil wars. That same policy wouldn't have worked in 1994 in Rwanda, where it would have produced an unstable power-sharing arrangement between victims of genocide and their executioners. The lesson: We cannot have one blueprint for all of Africa's problems. Even "good" moral decisions, such as those so often urged upon us by the West, can be bad sometimes.

Obama assumes that the fundamental challenge facing Africa is the lack of democracy and the checks and balances that come with it. But how does he explain why authoritarian Rwanda fights corruption and delivers public services to its citizens much better than its democratic neighbor, Uganda? In fact, the Ugandan brand of democracy has spawned corruption and incompetence more than it has helped combat them. The country's ethnic politics makes patronage and corruption more electorally profitable than delivering services.

Obama's preferred models of successful development, Singapore and South Korea, were not democratic when they rose to prominence. His proposals on ending corruption -- "forensic accounting, automating services strengthening hot lines and protecting whistle-blowers" -- are technocratic in nature. But the real challenge is how to give Africa's rulers a vested interest in fighting corruption. In most of Africa today, corruption is the way the system works -- not the way it fails.

The lesson for Obama is that Africa is likely to get better with less meddling in its affairs by the West, not more -- whether that meddling is through aid, peacekeeping, or well-written speeches. Africa needs space to make mistakes and learn from them. The solutions for Africa have to be shaped and articulated by Africans, not outsiders. Obama needs to listen to Africans much more, not lecture them using the same old teleprompter.

Andrew M. Mwenda is managing editor of The Independent, a newsmagazine based in Kampala, Uganda.
Posted by AfrikaEye at 13:36:00